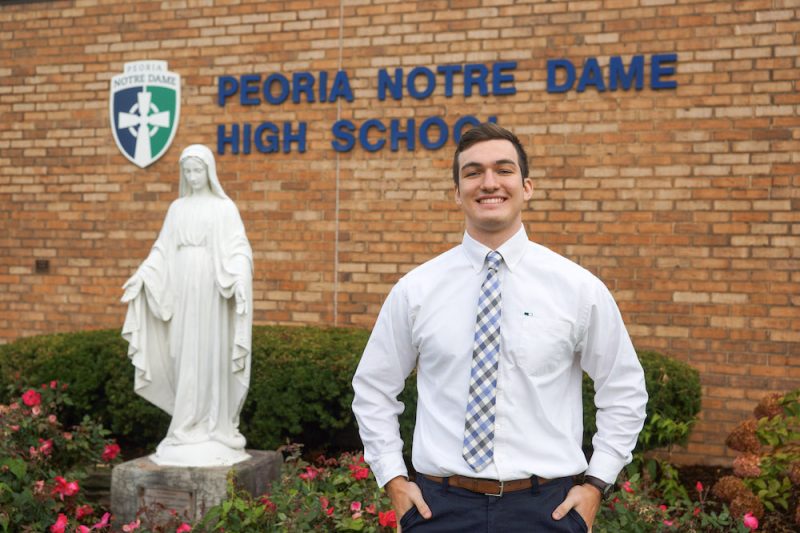 John was chosen for January Student of the Month because of the “energy, positivity, and leadership” he brings not only to his in-person and online classes, but also to the many clubs and sports he is involved and very successful in.

First, John is extremely successful academically. He is in the top portion of his senior class with a full schedule of AP and honors classes, including the classes of the AP Capstone program, AP Government, AP Calculus, and more. He is not only successful, but also a “positive,” “reliable,” and “thoughtful” member of both the in-person and online classroom; his AP Government teacher, Ms. Carroll, says he is a student who she can always “turn to for a thoughtful answer or provoking question that brings [the class’] focus and discourse to a whole new level… It can be tough to keep a positive attitude when online, but John has always done a great job.”

His academic success is especially impressive, though, in conjunction with his heavy involvement in extracurricular activities. Firstly, he has been a vital member of the Varsity Men’s Basketball team since his freshman year. Coach Lacher says John is “a complete joy to coach. He is an absolutely awesome teammate and gave everything he had to his team in every practice and game.” He is also involved in many of the school’s major leadership clubs, including All School Council and Student Ambassadors. All School Council leader Mrs. Hausauer describes him as a “responsible, quick to help, and personable” member of student government, and she also speaks of his “infectious Irish pride… [and] willingness to serve.”

Congratulations to John on this well-deserved award!