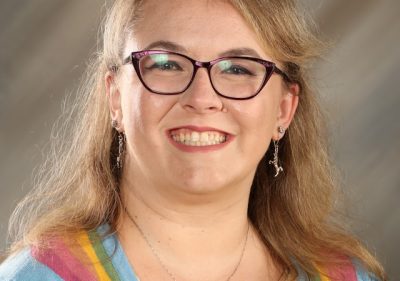 Favorite Quote: This takes a bit of introduction. Wangari Mathaai, a Nobel Laureate, told a story of a forest on fire. All the animals watched the fire except for a hummingbird who flew back and forth from the river bringing a drop of water onto the fire. The other animals like the elephant with its big trunk ask the hummingbird what it’s doing because it’s only bringing a little drop of water and without stopping, the hummingbird says, “I am doing the best that I can.” Wangari Mathaai then goes on to say “I will be the hummingbird.” It is a quote I have posted at the front of my classroom and story I share with all my students because we should always strive to do the best we can all the time.

Mrs. Girsch has a few favorite parts about PND: the first being that she cannot get lost due to being a graduate from PND in 2004! She also enjoys working with teachers who taught her and whom she holds in a very high regard, the fact that faith is represented at the front of every classroom, and of course, Chicken Thursday. Mrs. Girsch has also grown closer to Mary working at PND, relating to her status as a mother and depending on Mary’s wonderful listening ear. Mrs. Girsch actually became a teacher by accident. Reportedly, she wanted to be a paleontologist or an archaeologist like Indiana Jones, but after switching to English education, her mother, “a teacher of 40+ years, was more excited on that day than on the days of any of my graduations, the day of my wedding, or on the days my children were born.” Another interesting fact about Mrs. Girsch is that she married the only boy who ever asked her to Homecoming (Shout-out to Mr. Girsch!). She also enjoys quilting with her mom, knitting, embroidery, gardening, collecting snow globes, and cooking French meals à la Julia Child.