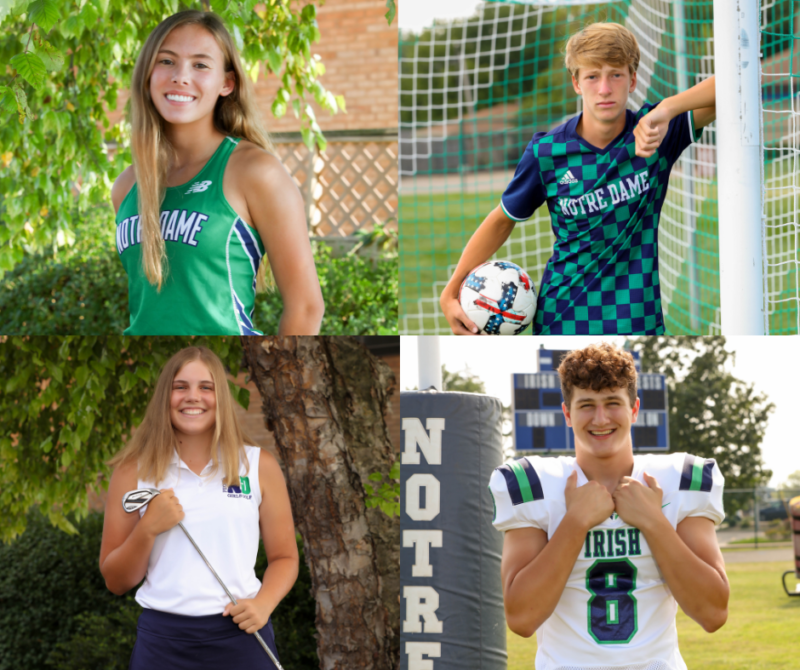 Congratulations to our Athletes of the Month for September, Teagan Cover and Danny Gutzwiller!

September Female Athlete of the Month – Teagan Cover: Cross Country Coach Dan Gray said “Teagan was our #1 runner in all six meets we ran during September, winning 3 of them. She is now #12 All-time for the Irish on the State CC Course at Detweiller. She is one of our team Captains and leads by example of hard work and perseverance, after battling injuries and illness for two-and-a-half years of Cross Country. Finally healthy, her determination and willingness to train like a beast have been an inspiration to the team.”
September Male Athlete of the Month – Danny Gutzwiller: Soccer Coach Mike Bare said “Danny was a returning All-State player for us this fall. As a senior captain, he helped guide our team to a runner-up finish in the Big 12 Conference while leading our team in both goals and assists. Danny is committed, hardworking, disciplined, extremely coachable, very talented, and a great teammate. Off the soccer field, he is polite, respectful, accountable, and an exceptional student. Danny has a very bright future ahead.”
And we are proud to announce October Athletes of the Month Addie Jannetten and Will Ludolph!
October Female Athlete of the Month, Addie Jannetten: Golf Coach Mickey Schallau said “The girl’s golf team had a very successful season going undefeated and finishing 9th at the State Finals.  A big reason for our success was Captain Addie Jennetten.  Having three sophomores on the varsity, Addie’s leadership helped the younger golfers prepare for the matches and tournaments.  Addie was like having a coach on the golf course.”
October Male Athlete of the Month, Will Ludolph: And Coach Pat Armstrong said this about Will Ludolph: “As the teams Fullback, Will rushed for 582 yards in three games against Richwoods, Normal West, and Normal Community. Additionally, as an outside line backer, he had 36 combined solo and assisted tackles during the three games.”
PND is proud of all of these exceptional students!
0Shares
PrevNext