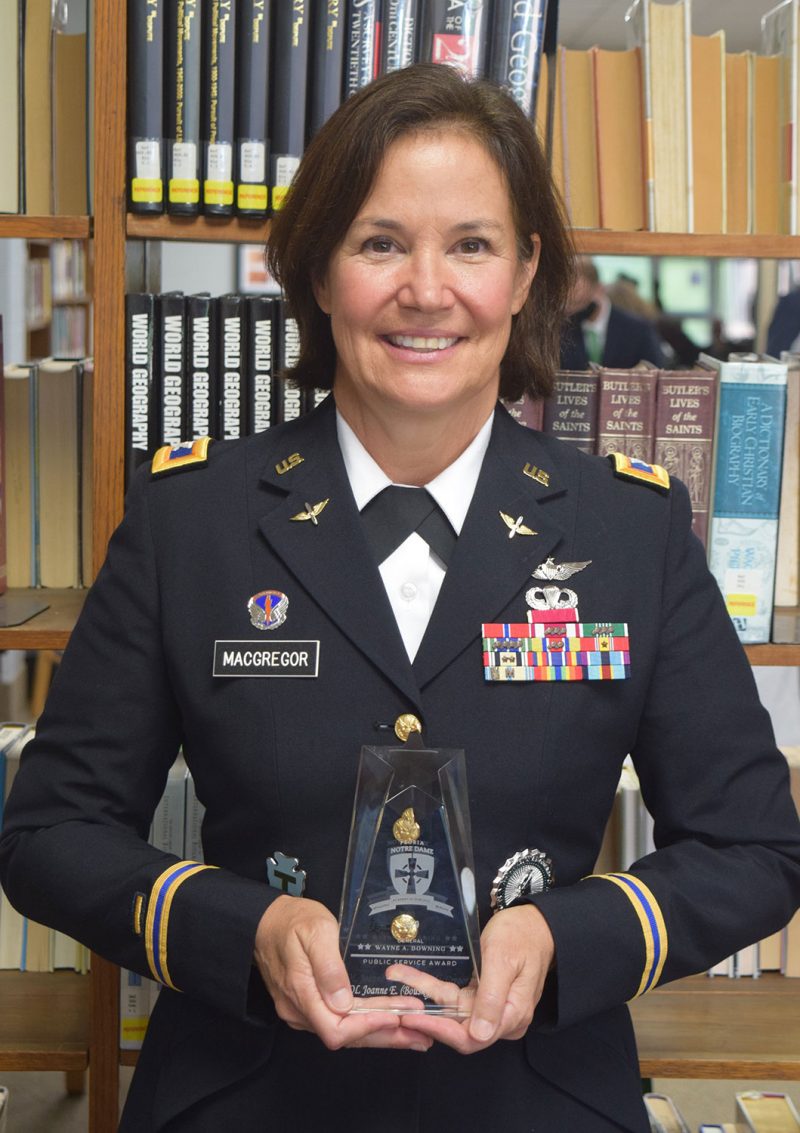 This award is in memory of General Wayne A. Downing, (5/10/40-7/18/07) a 1958 Spalding Institute graduate who retired as a four-star general from the U.S. Army. He graduated from the U.S. Military Academy and received an MBA from Tulane University. He finished his career as Commander-in-Chief of the U.S. Special Operations Command in 1996.

The General Wayne A. Downing Public Service award is given to a Peoria Notre Dame alumni who has served or is presently serving their community as a police officer or firefighter or the United State in a branch of the military. Each recipient is recognized for their character, honorable service, and exemplary life reflecting the values of Peoria Notre Dame High School.

Colonel Joanne E. (Bousky) MacGregor grew up in Peoria and attended St Vincent de Paul grade school. As one of 8 children in her family to graduate from Catholic high schools in Peoria, MacGregor graduated from the Academy of Our Lady/Spalding Institute in 1986.

Prior to entering the military, MacGregor worked for Caterpillar as a Machine Sales Representative supporting dealerships for more than 5 years. Within her position, she supported dealers with machine sales marketing, financial merchandising programs, business development, and training.

In 2000, MacGregor entered active duty in the Texas Army National Guard. During her impressive military career, she achieved the rank of Colonel. She served as the 1st female Commander for the 36th Combat Aviation Brigade, 36th Infantry Division. In her position, she was responsible for command and control of more than 1,500 aviation personnel and more than 100 aircraft across 6 locations throughout Texas and Mississippi.

Throughout her career, she also served in various roles for the Texas Military Department including Chief of Staff, Director of Public Affairs, and Deputy Director Government Affairs. MacGregor was selected from 80 Lieutenant Colonels and Colonels in Texas to attend resident Air Force War College. She was the 1st Female UH-60 Blackhawk Instructor Pilot in Texas, a Bronze Star recipient for leadership in combat, and a Legion of Merit award recipient for leadership and service.

Colonel MacGregor has two sons, Miles (18) and Evan (15). She participates as a volunteer in a non-denominational program called “Church Under the Bridge” which feeds the homeless while providing spiritual music, prayer and fellowship. In addition, she recently committed to being a Big Sister for Big Brothers/Big Sisters of Central Austin.